which is washed out by a stereotyped Diljit kind of aimless slapstick comedy. Director Mandeep Kumar showed his guts in handling two star powers colliding in Jihne Mera Dil lutteya, but here he surrendered at the feet of Diljit’s stardom and left the story loose. Ambarsariya (Diljit Dosanjh) is an Insurance agent, a Casanova, who sells the highest number of insurance policies and sways the hearts of the beautiful girls with equal charm in the public eye, but he is an undercover agent working for Indian intelligence agency RAW. He is sent to Ambarsar (Amritsar), his own home town, on a secret mission where he has to track down three suspects. Meanwhile, in due course he goes on to woo three charming girls there. The Story revolves around the idea, how he tracks down and eliminates the real ‘threat’. 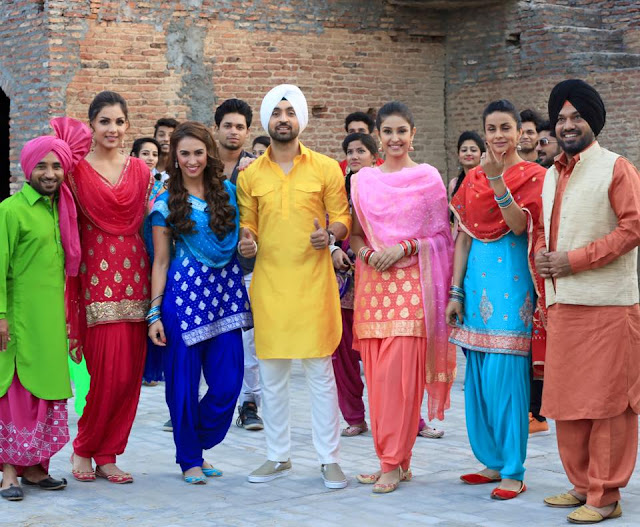 Dheeraj Rattan has written a Rom-Com with a tinge of suspense thriller and director Mandeep has tried to keep the pace gripping, but Diljit’s freestyle comedy and charmer antics make it a one man show. Actions that move the story forward comes in breaks that too overloaded with comedy. The Director has left no scope for the audience to pay attention towards suspense and when he surprisingly reveals the suspense in the end audience realizes that it was a suspense film. The Film has too many loose ends.
Why Ambarsariya was narrating a top secret mission to a Dhabha Wala (Karamjit Anmol) and his comrades? Why he waited for 2 hours and 40 minutes to eliminate the target who was sitting in front of him at Dhabha in the very beginning? Why suspect himself waited on Dhabha for all that while he was narrating the whole story in full public view? He might be enjoying his last bottle of wine before being killed? What else? The Big question is that why our super undercover agent let the criminal escape from the spot? Why, instead of capturing the main villain, he enticed the innocent child to shoot him? Is Punjab police so incompetent to judge a difference between raw agent and a bragger? If Amritsar was his home town, why Ambarsariya need to rent a house there? As a pro undercover agent, he is trying to sniff all the three suspects by their body language, but why could not he judge the teacher? He kills only four terrorists out of 5 suspects and never pays a heed to find missing fifth one and he packs up the major mission without ruling out any danger remaining to minister’s life, but he is still a top agent. I am surprised to know that our RAW works in this so frivolous manner. Dheeraj Bhaji, please have some real time training at RAW headquarters. Tell me one more thing if Ambarsariya is all time busy in charming girls and chasing criminals when he does sell highest number of policies? Gul Panag is wearing a gun on top while seating in Raw Headquarters while Ambarsariyan, who is already on the target of terrorists, always keep it concealed on lethal missions. Mr. Dheeraj how you shifted the huge LPU auditorium from Jalandhar to the Amritsar? Dear Sir, cheating requires a great presence of mind. Scenes depicting landlord encounters at Patiala and Amritsar could be chopped off completely. Even after being good foot tapping numbers no song has a particular relevance to the narrative. If these could be avoided then the snarling length could be cut short at least by 20 minutes.
In acting department Diljit once again performed like Diljit and he wasn’t at all in the character of either an Insurance Agent’s or Undercover Agent’s skin. He worked hard to sound like an Ambariya, but even after churning out perfect Majhailly vocabulary he fails to articulate the accent of that dialect. Gul Panag’s make up support completely let her down. Her Punjabi accent is not up to the mark. Many of good dialogues written by Balraj Sayal were gone haywire. Navneet Dhillon and Monica Gill need to work more on their body language and expressions while Lauren Gottlieb looks perfectly innocent and confused as required by her character. Sunny and Inder Bawra needs a special mention for up to the mark background score, which elevates few scenes having no such potential. DOP Anshul Chobey captures the essence of holy city Amritsar and Patiala as well as other locations of Punjab. Editing needs to be crisper.
I can risk to bestowing two stars to this onetime masala entertainer.