Skip to content
Deep Jagdeep Singh
Rating 3.5/5
Bambukat is a film which takes you back to the roots. Set in the post independence era, Bambukat, not only highlights the age old issue of

discrimination based on skin color it goes further depicting the societal behavior based on financial status. It dwells deep into a true Punjabi spirit of creativity and undying spirit of not giving up till the end. After a long gap a Punjabi film writer has come with a plot which is completely fresh and woven within the ethos of Punjab. This film clearly declares its target audience demarcation and remains true to its culmination. This film reaffirms that Punjabi film market belongs to rural audience and if you can pull them to theatres you can do wonders on box office. For this, content wise, you have to be authentic and grounded.
Set in 1960s Bambukat brings up a simple story of Channan Singh (Ammy Virk) younger son of a mediocre farming family who does nothing good for the household, but he has a knack for machines. His elder brother (Harp Farmer) and mother (Anita Devgan) reluctantly believes in his talent, but stubborn father (Malkit Rauni) thinks he is good for nothing and his antics with machines is sheer waste of time. Thus, this charming cur gets a dark skinned wife Parminder aka Pakko (Simi Chahal) with whom he falls instantly in love. Her dusky beauty and simplicity add an excitement in his life. On the other hand Pakko, who has been degraded from the childhood due to her dark skin, gets astonished to know that Channan Singh not only likes her, but also loves her the way she is. The story takes a sharp turn when Baku along with cannon goes for a visit to her parents on a bicycle. There they meet the husband of her sister Simmi (Sheetal), Resham Singh (Binnu Dhillon), an egoistic suited-booted urban government officer who rides a bulky motorbike with pride. Jolted with discrimination based on social status in the In-law’s house, Channan Singh makes few impulsive decisions. Instead of achieving high status and an edge over Resham, he not only gets more dismayed, but lands into jail too. The narrative of Bambukaat revolves around how he proves his mettle and how his love for machines help him to set a score with Resham. 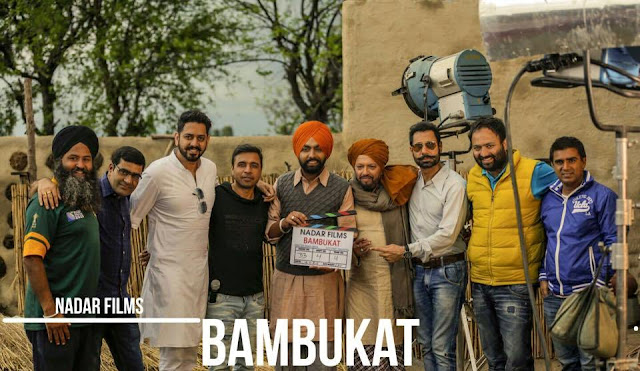 After writing Farrar (Drama) and Jatt James Bond (Suspense Thriller), Jass Grewal finally comes back to his roots with a period drama based on real Punjabism. He has captured the nuisances of Punjabi culture and rendered an authenticity to the mannerism of characters. After making stereotyped films like Naughty Jatts (2013), Goreyan Nu Daffa Karo (2014) and Dildariyan (2015) director Pankaj Batra realized the basic essence of a regional cinema with Channo Kamli Yaar Di released earlier this year. And finally with Bambukat he has exploited his full potential and this clearly depicts on screen. He has taken care of the minuscule details of characters and atmosphere and tried his best to remain authentic. This is the basic reason why audience instantly gets connected with the characters and their mannerism. Many Punjabi films usually get bumped due to its baggy screenplays, but Bumbukat floats like a water channel and culminate into the ocean of audience applauses. Dialogues written by him along with Jatinder Lall enhance the impact further. From now onwards, Jass Grewal will be known as an established screenwriter.
With, Bambukat, Punjabi cinema not only witnessing a huge uplift at box-office, but also the emergence of a new superstar, Ammy Virk. Acting wise, he still needs to go a long way, but he definitely has a promising screen presence. After doing a proper rehearsal with two supporting roles in Angrej and Ardas, in Bambukat, Ammy proved that he can carry the burden of a huge film on his own. Once again Binnu Dhillon gets a chance to break his comic image and he is almost successful, but at many places he just slips into loudness from subtlety. He carries the character of an urban proud officer with ease, but had he controlled his expressions and body language in places it would have looked more profound.  Debutante Simmi Chahal also looked realistic and made her presence felt in her smaller but stronger character of a cloudy Colleen. Sheetal Thakur has been there just to smile and she looked charming on screen. All the supporting cast aptly fits. Songs and background score are in sync with the mood of the narrative.
Shabana Khanam’s art direction deserves a special applause. She has created a relatable atmosphere which complements the Vineet Malhotra’s apt cinematography. Manmeet Bindra’s Costumes provided vibrancy to characters.
Few spoilers, though Bambukat boasts of fine tuned screenplay, but there are a few glaring omissions. It is okay that Channan Singh was busy in assembling his secret Bambukat in a hideout of the Jail’s deserted factory, but is it not surprising that jailer never paid a visit for a whole month to supervise? How could Channan draw a design of his Bambukat and hide it under his blanket in a barrack full of co-prisoners without attracting any attention?
In conclusion, considering all the things above, Bambukat once again proved that content is the GOD. Another important thing is that when you have a meaty film, it will reflect in its trailer and it will definitely touch the chords of audiences. The Story is the real hero of the film and a well narrated story like this will bring the core audience to cinema halls. Bambukat deserves 3.5 stars.
And for those who don’t know what Bambukat is, a desi transport vehicle made by the fusion of a bull cart and a motor engine. It is also used as a slang for motorbike, which is the basic premise of this film.