Lazy Story of the High Spirit

Second installment takes the story further from here, when Guru Gobind Singh reaches on the banks of Godawari and inspires Banda Bairagi Madho Dass to take charge of the Sikh uprising against Mughal’s. By baptizing and offering him the true lessons of life Guru Gobind Singh inspires him from an ascetic into a military commander and name him Banda Singh Bahadur, who later becomes the first ruler of the Sikh empire.
The film opens with the final days of Banda Singh Bhadaur and instantly infuses the emotions in the audience. Sequences depicting, how Banda was captured in a huge cage and how 700 Sikhs were butchered in broad daylight when they refused to convert into Islam, makes the heart bleed. From here film goes into flashback, unfolding the major narrative about the rise of Banda and the battles he fought with the help of Sikh army and the blessing of Guru Gobind Singh. The narrative also goes into details about Banda establishing a true Lokraaj (democracy), abolishing Zimidari system and handing over the land to toilers. After winning a stern battle at Chapparchiri, near Chandigarh, between Wazir Khan’s huge army armored with canons, elephants and horse riders with a small Sikh Army fighting with mere skills of swords and archery, Banda announces the beginning of the Sikh empire. 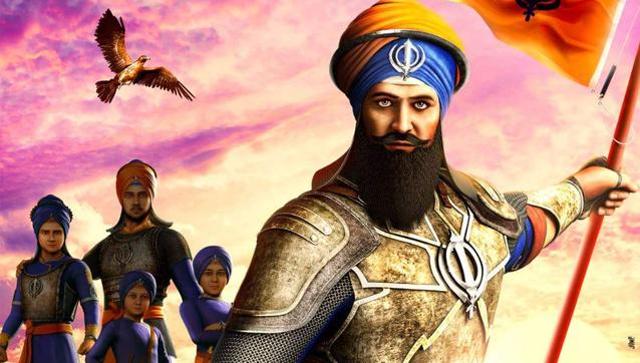 The film’s best part is writing. The Punjabi version written by Baldev Gill, filled with ethnic Punjabi idioms, keeps the true essence of Sikhism and Punjabiyat. Writer of ace films like Chann Pardesi, Gill reminds us the golden days of Punjabi cinema. Narrated by Om Puri in a persuasive style and expression takes the script to the next level. Few of the dialogues truly invoke the Sikh spirit and you can literally witness the uproars of ‘Bole So Nihal’ in cinema halls. Harry Baweja has put every effort to keep controversies at bay, like narrating the Guru Gobind Singh’s part through voice over instead of putting them directly in his mouth. Though, weaker direction has left the film into scatter fragments and patches.
What troubles me about the Rise of Banda is Harry’s insecurity about its success at the box office. To keep the brand value of the venture, he has kept ‘Chaar Sahibzadey’ in title while he is trying to tell the story of Banda Singh Bahadur. Not only this, to keep the already earned audience he has repeated almost half of the first film in the sequel. While this year, the whole world is paying homage to Baba Banda Singh Bahadur on  his 300th Martyrdom Anniversary, he should have not bothered. In the first half he takes a lot of time to create a melodramatic chain of sequences. Further, he retells the story of the first part in bits and pieces along with Madho Das’s transformation into Banda. He takes the baton in his hands only at the interval shot. In the latter part, most of the time goes into other wars happened between Sikhs and dictators on the way to Sirhind for the final battle with Wazir Khan. But this huge battle suddenly ends just in seconds. I was actually curious to know how a small Army wins over the hefty armored well trained Army of Mughal’s but Harry Baweja disappoints completely. As soon as, Banda kills Sucha Nand, the audience starts to move out, but the few remaining learns that there is a long post script which tells about the other wars fought by Banda, where he took shelter in odd times and how finally he was captured by the Mughal empire after eight months of the long head-on struggle. If, Instead of retelling the story of Chaar Sahibzaadey, he would have invested the screen time in Banda’s life, it would have been a different story all together with much more refreshing historic extravaganza. It would have escaped him from culminating the film hurriedly in the end. Best part of the film is sequences portraying Chaar Sahibzadey’s, especially younger ones, soft playful side of tender childhood. The Audience knows them as strong and brave warriors, while their amusing games of learning Gatka (Sikh Marshal Arts) at a tender age paint them with reality and amuses the audience.
Music is the lifeline of the film. The title song running throughout the film ‘Bande Da Khanda’ keeps the high spirits on and takes it higher with each occurrence at crucial turning points. Sukhwinder Singh’s high pitched voice and flawless expressions makes it soulful. Dr. Rabinder Singh Masroor’s lyrics are full of rhetoric. It is going to be an integral part of the playlist of Sikh events specially Gatka Competitions. Music director Nirmal Singh has profoundly integrated various lyrics of Baba Bulleh Shah as a commentary on religious hypocrisy and dictatorship, but the only hiccup he has done is composing it into the tune of ‘Wo Krishna hai’. It seems a poor parody of the original song and takes away the attention from the real message embedded in the lyrics. Though all the songs fit at appropriate points in the screenplay and add value to the story. The background score is apt too.
The weakest part is the animation. It could have been sharper and crispier. Audience who has watched many war based animation films will definitely feel the difference. Particularly burning swords at a crucial point makes it laughing stock. Harry Baweja deserves the extra brownie point for assembling the right cast (voice over artists) and crew for this historic project and everyone puts his best to give it a high production value. I will be bestowing Chaar Sahibzadey-Rise of Khalsa two and half stars. Unfortunately currency notes issue is hitting the box office badly.