Skip to content
Deep Jagdeep Singh|Channo Kamli Yaar Di brings a new hope for substantial cinema in the Punjabi film industry. Apart from an appropriate ensemble of cast and gripping screenplay, the film has a concrete story (but with many loose ends) with which audience gets connected as soon as the first frame opens.

Taji (Binnu Dhillon) is a common village guy, age is running out of his hand for a handsome marriage and his mother (Anita Devgan) is worried, but he does not want to get married because he loves his childhood friend Channo (Neeru Bajwa). Unfortunately, he could never express his feelings. Now she is married to someone else and pregnant. One day he learns that Channo is not happy. They meet in a Gurudawara and Taji learns that her husband Jeet (Jassie Gill) went to Canada and she lost contact with him a few months back. She wanted to go to Canada in search of his lost husband because she feels he is in some trouble. On the other hand Taji feels that Jeet is a cheat and he will now be able to get Channo. To impress her he agrees with everything she asks and flies away to Canada in search of Jeet. 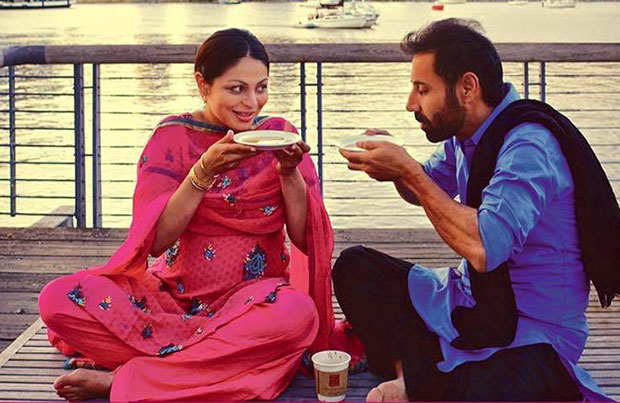 Writer Naresh Kathooria has written a story that has a substance and appropriately touches the core issues of Punjabi youth and their life in foreign lands. His dialogues are ethnic, relatable and raw as real. Though the screenplay is gripping, but it sinks at a few points and obstructs the pace. Director Pankaj Batra has done a commendable job in presenting the empathy of young Punjabi girl, who is left in the middle of her dreamland, shattered and emotionally broken. But she sees a hope in her childhood friend and with his help she goes beyond the stereotypes of Punjabi culture with a baby bulge in search for her lost love and father of her unborn child. This story also caters to the idea of friendship between a married woman and a man from her past.

For the first time Neeru Bajwa looks like a real Punjabi girl, who wears ethnic Punjabi suits, talks (though not perfectly) and walks like a common village woman, carries her womanhood naturally and aptly. Binnu Dhillon is at his best in Channo. He was wasted as a standup comedian till now, but for the first time he performs like an actor who can express love, emotions, pain and friendship all together with his face and body language. Pankaj Batra has taken a big risk by casting a non-chocolaty hero in the most romantic and emotional role, but Binnu’s confident performance proved him right. Though, Neeru’s age is quite visible through her face and specifically on her eyelashes, but this role suits her age. She was actually eight months pregnant while shooting for this film and she carries her baby bulge so naturally. Binnu Dhillon steals the whole charm. Jassi Gill, though, looks handsome on the screen, but needs to work on his expressions and dialogue delivery. Rana Ranbir, Karamjit Anmol, Anita Devgan appropriately fits into the shoes of their characters. Music is the soul of the film and it gives an appropriate feeling of romance and pain where needed.

Now flip side, though Batra has a tight grip over the screenplay, but there are things he had left loose. Like, Was Channo living all alone in the village, where were her family, how they sent her to a foreign land with a stranger? Mr. Batra, please help me to find out that travel agent who arranges a Canadian visa overnight. Even I want to find out that property agent who can sell five acres of land just in a jiffy. Sequence in the first half where Channo and Taji were going door to door in search of Taji is somehow dragged a lot. In the second half when they try to enter into the goon’s house, it also paces down the flow. Tony (A villain’s goon), who brings Channo, Taji and Anmol to a motel where Jeet has lived, has met them and recoganise them well. Even the sharp shooter has seen them, but all three keep playing games with the other goons and they don’t know who they are. Surprising! Where you find so innocent villains Mr. Batra! Last but not the least, Jeet is beaten for four months, kept on high dose of narcotics, how, suddenly, he can stand on his feet, speak with full energy and fight with full force?

Even with these glaring hiccups, screenplay keeps the audience engaged. Neeru Bajwa will remembered for this title role, because she has done nothing earlier that could be remembered as the important contribution to Punjabi cinema. For the substantial story, excellent performances and pertinent direction I will rate Channo with three and half stars.