brotherhood between common Pakistani and Hindustani. Dushman tries to shatter the stereotypes that every Pakistani is a terrorist and every Indian is an enemy.

After losing his family in a terrorist attack Naren Singh Maan (Jashan Singh) goes to Bangkok to work as a waiter in a hotel. There he has to share a PG room with Karim (Kartar Cheema), a Pakistani, working as a security guard in the same hotel. Naren’s hatred surfaces instantly when he learns that Karim is a Pakistani, but a further turn of events forces them to live and work together. Their dreams to restart and live a successful life shatter when both are caught in drug and human trafficking racket. How they get out of Satan’s Paradise? How their hatred turns into a deep friendship and brotherhood to save each other’s lives forms the rest of the story.
Writer of Ashiqui, Jism, Murder and Raaz sequels Shagufta Rafique turns director with Dushman. A Story written by Shagufta looks promising on paper. But her screenplay, dialogues and execution are a big let down. From the very beginning film could not get connected with the audience. Sequence after sequence unfolds, scattered here and there, and could not hold the grip of the narrative. The sequence where Kartar Cheema expressing his angst explains that every Pakistani is not a terrorist is memorable. Films climax and pre-climax scenes are commendable too and deliver the subtle message of humanity and brotherhood across borders. Overall Dushman lacks the spark. Dialogues are so bookish that a seasoned actor like Kartar Cheema look so dumb while delivering them. The film with the tag line ‘a story of the enemy within’ must take the audience on the inner journey of the protagonists. Dushman only touches the surface. Bangkok part of the entire story is loosely inspired from Mahesh Bhatt’s blockbuster Naam (1986). 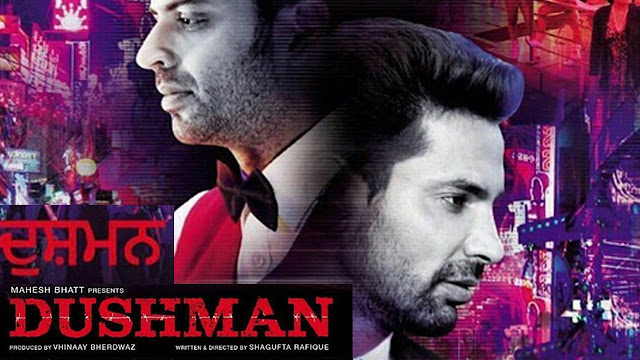 Kartar Cheema literally seems trapped in director’s whims. Though he carries the character with ease and confidence, but he skips to improvise. His body language and dialogue delivery are visibly affected. Belonging to the hinterland of Punjab, Kartar, completely leaves his rustic accent and delivers in an unauthentic tone. Debutante singer turned actor Jashan Singh keeps wearing a weary look throughout the film. He needs to work hard on expressions, body language and delivery. Actress Sakshi Gulati is used just as a prop. Gulshan Grover excels once again, but he has been completely wasted. Savita Bhatti is also wasted.
Shagufta tries to use the background score (Raju Singh) to keep the audience invested, but slow narrative and unbinding visuals could not maintain the grip. Item song Mehrama has a rich Bollywood look, a first for Punjabi cinema, but overall music adds no value to the film. Editor Deven Murdeshwar could have helped the film to get it a pace if he had cut it down by fifteen to twenty minutes. Thus, another remarkable concept and a big banner production slip in drain with sloppy execution. Dushman could be watched for its message of universal brotherhood amidst the suffocating atmosphere of nationalism versus freedom of expression, but strictly without any huge expectation. Dushman tries to define true friendship but it might not find friendly audience.
Deep Jagdeep Singh is a freelance journalist, Screenwriter and a Lyricist.
http://www.facebook.com/deepjagdeepsingh.