literature. Gelo is inspired from well known Punjabi novelist and short story writer Raam Saroop Ankhi’s novel Gelo. Gurmel Kaur aka Gelo (Jaspinder Cheema) belongs to high class traditional farming family, who falls in love with Rama (Gurjit Singh), a laborer from a lower class. They fly like a free love birds until one day suddenly an abrupt incident turns their life upside down. How Gelo’s fate takes her through dark lanes of life is the central idea of the film.

Director Manbhavan Singh has tried to translate the story from paper to celluloid, but he lacks in delivering a gripping screenplay. The narrative has many strong sequences, leaving deep impact, but the problem lies in stitching these sequences. They are scattered in such a manner that could not keep the audience engrossed. At many junctures from the very beginning narrative keeps sinking and coming up back with the glaring hope to outshine, but only disappoints. Even the characterization is so superficial that actors could not whole-heartedly get under the skin of their own characters. While adapting the fiction to cinema Singh could not get into the psychological cores of the characters and the atmosphere around, thus he had just succeeded in drawing the caricatures of the life like characters created by Ankhi. 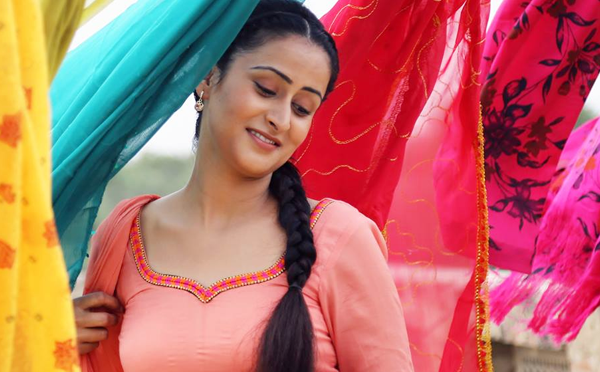 After debuting as a modern girl of Ik Kudi Punjab DI, Jaspinder Cheema has tried to continue her journey with another women oriented character and she perfectly dons the outlook of Gelo, but unfortunately she falls short in expressing the internal agony of a crestfallen, devastated and wrecked women. In intimate scenes she looks hesitant, in intense moments she looks lost and in rebellious sequences she goes over the top. VJ turned actor turbaned sardar Gurjit’s appealing screen presence could steal the hearts only if he could shed his wooden acting. Though both got married soon after they finished shooting for Gelo as both get hooked on the sets, but this off screen chemistry could not translate on screen. There is no spark or intensity of romance between a real life couple on screen. Pavan Raj Malhotra, as usual, takes the bar up with his profound mannerism and flawless delivery, but once again he has been wasted due to inconsistency in his character graph. In the matter of the performances, Dilawar Sidhu is a bigger surprise. He has delivered his best act till now as Jagtar, a drug addict, a father, a crooked husband and a gullible common farmer.
Cinematography of DOP Jatinder Sairaj enriches the cinematic value of the film while Salil Amrute’s background score struggles hard to add up the rapidity to the narrative. Umar Shaikh’s music is strictly okay, but the songs Rang Chaddeya and Kamli could have rendered much impact if both have been choreographed and shot properly. The editing could have been crispier. Gelo deserves only two stars.