Skip to content
Kaptaan might have won the case in the courtroom, but ‘Kaptaan’ completely fails to win the hearts of audiences. This film once again affirms that Punjabi cinema lacks profound screen writers or we have still not risen above the formula film making based on the myth of ‘comedy is hit’. Even the best writers fail to deliver an engaging screenplay out of a good story.

Writer Dheeraj Rattan’s Kaptaan Singh Grewal (Gippy Grewal) is a young and carefree struggling advocate having no case in his pocket to prove his mettle. Will Kaptaan, the only son of a renowned advocate Mahinder Singh Grewal, be able to carry forward legacy of his father? He remains carefree until one fine day his childhood friend and now a grown up love interest Sam’s (Krishma Kotak) family agrees to take him abroad after marrying their daughter only if he wins a case in one month. Kaptaan turns to Preeti (Monica Gill) for help, who runs an NGO and help needy people to fight the legal cases in the courts. She is struggling to get a lawyer for Sukhdev Singh (Daljinder Basra) a victim of stolen identity. Kaptaan accepts this challenging case because he has to face most crooked Advocate Dhillon (Pankaj Dheer) in the court room. Will he be able to win his love by winning this case? Will he be able to reinstate lost pride of his father? 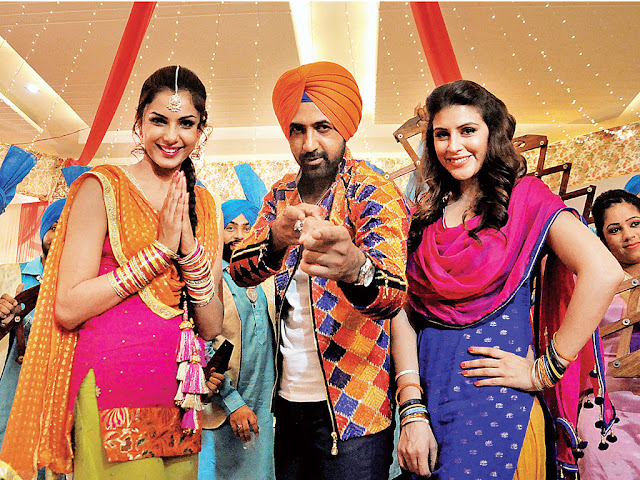 First half of Kaptaan is one hour long stand up comedy show, which gives of few giggles and astonish you with many double meaning dialogues but meagerly contribute to move the story further. One hour passes just introducing all the major characters and few unwanted songs. Second half unfolds the various aspects of missing Identity of Sukhdev and in a much predictable manner Kaptaan magically gets all the scattered clues of the case, without putting much effort. It follows the stereotype unrealistic courtroom drama, few action scenes and finally Kaptaan wins the case and hearts too. Balraj Sayal and Surmeet Maawi deserve appreciation for placing few perfect idioms as dialogues at the right places.
I could hardly find a reason why director Mandeep Kumar chose the narration technic to introduce his characters, though his placement of two contradictory environments were par excellent and graphics were flawless, even then narrative remained too dull and boring. Further, the first half was burden up with the fast forwarded flash back of Sukhdev, another long sequence of narration instead of action. Dear Mandeep, I bought the ticket to watch the film, then why I had been forced me to hear your story? Dear, Sir, please give me a clue about that clue which inspired Kaptaan to recreate the train accident scene? Police or detectives usually recreate any crime scene to join the loose ends of the scattered clues to match them with available evidences or eye witnesses, but even after the climax Kaptaan had not even single concrete evidence. Why mute spectator and eye witness Nindi draw the whole incident on the wall of a deserted building instead of sharing the incident to someone in the village? Why Shindo turned hostile in the court?
Gippy Grewal single handedly carried the whole film confidently. He looked fresh in a lawyer’s suit and delivered his lines with his well known style and expressions. Gippy’s comic timing with Umang Sharma was perfect while punch lines were so clichéd that these went straight over the top. In his first appearance on silver screen Umang Sharma looked confident much in the character but with a flat face. More than his funny dialogues his innocent face ticked funny bones. Both the girls were there as Barbie dolls just to show off their cleavages and long legs. Krishma hardly got a chance to churn out a few lines that too in pathetic accent without any command over Punjabi language. Monica got a few more scenes but nothing to do apart from delivering a few lines in hinjabi in most unrealistic tone. Pankaj Dhir carried the tough image all thru but he also disappoints at language front, though he delivered the dialogues with full confidence. Rustic Punjabi idioms fell flat out of his mouth.  As senior Grewal, Amar Talwar, carried out perfect emotions of a father and wounded truthful lawyer of yesteryears. Big applause goes to Nindy, the mute character for his perfect appearance, flawless expressions, natural body language and his speaking pair of eyes. As Sukhdev, Daljinder Basra, Steals the show, if the character would have been developed appropriately, he might have eaten up Gippy Grewal on screen. Another commendable job is done by visual graphic artist. Background score and Cinematography is okay. Songs are completely unwanted and misplaced. Editing is not up to the mark.
Kaptaan has few basic similarities with a Bollywood flick Jolly LLB with a new twist added in the shape of stolen identity. Two stars for this one time watch.