Deep Jagdeep Singh
Rating 2/5
Big stars, big hype; a lot of suspense and drama, but finally the Lock opened and left the audience in complete dismay. It’s true that a film’s

premise is built on a one liner, but that one liner must flow like a current beneath the interwoven chain of sequences leaving the audience awestruck till the last frame. Unfortunately, Lock’s narrative gets locked on a point and could not move an inch after that.

Dubai returned Gill (Smeep Kang) is a patriarchal father and a stubborn husband, who pretend to be an idealist. Disturbed by unpleasant incidents, under the influence of alcohol and provocation by a loyalist Bhola (Gippy Grewal), he plans to go on a binge night with a sex worker (Geeta Basra) of his daughter’s age. Incidentally, this binge night turns into a nightmare when the merry-making couple gets locked in a deserted workshop. Lock is a soul searching journey which helps Gill to unlock various inner tangles of his persona as well as unmasking the double faced society. But the bigger question is who will open the lock? 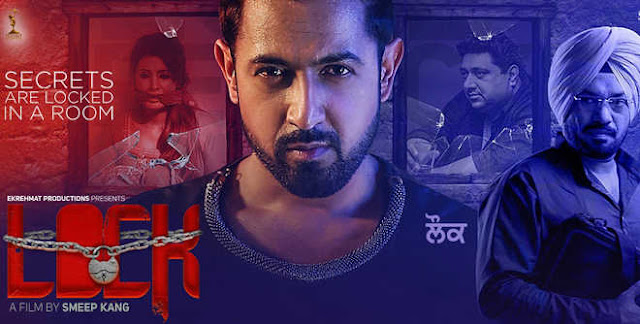 The playwright turned writer/director Pali Bhupinder Singh tried his best to tread on an untrodden path, but his much hyped suspense thriller lacks jaw clenching grip and tortuous graph. The first half crawls at tortoise pace and beat around the bush to create subtle comic situations out of the social catastrophe of Punjab. Touching on the issues like the plight of farmers and their disillusioned younger generation is apt, but it confuses the audience and drifts them away from the main theme.
Further, in an attempt to highlight the disrespectful attitude of society and film industry towards writers; specifically film writers, he ended up making a mockery of them. I kept on wondering; why in the first place he chose this character to be a writer, but at the end writer turns out to be the one who shows the ray of light to the protagonist in the darkest night of his life. Even then, he seems unrelated to the narrative and used only as a property instead of a meaty character. Touching too many issues, consequently derailing the audience’s attention from the main plot and leaving them untouched at the end are major setbacks of Pali’s film writing, glaringly visible in all of his films including Stupind 7, Main Teri Tu Mera and Lock. Surprisingly, he is the writer of most gripping plays like Mitti Da Bawa and Terrorist Di Premika.
Right after Carry on Jatta Smeep Kang’s directorial abilities are fading with each film. From Lucky Di Unlucky Story he started disappointing; with Lock, he pushes us to the peak of total disappointment. Lock, an unofficial remake of much acclaimed Malayam feature film Shutter (2012), turns out to be a fried prawn in Kaddu Rayta. Particularly in this film Smeep, juggling between acting and direction, lost his grip on both. In the second half, the film keeps on dragging until its almost predictable culmination. What goes in his favor; is choosing a bold subject, putting everything to make it a commercial venture and taking the risk to play the lead character himself. Unfortunately, all goes in vain when you could not expand the potential idea to its required depth and height.
As a protagonist, Smeep tries his best to remain closer to the character, but he could not go beyond carrying his natural innocent expression throughout the film. He fails to instill the much required agony, anxiety and bewilderment into the character. In his cameo appearance Gippy Grewal is loud and lousy. Born and brought up in England, Geeta Basra doesn’t look like a sex worker. Neither she walks nor behaves or speaks like a sex worker. Gurpreet Guggi carries his short character aptly. Karamjit Anmol is at his best in a caricature character. Sippy Gill’s guest appearance is unsurprising. Other supporting actors are strictly okay.
The film is majorly shot in a dark workshop, thus leaves no scope for extraordinary cinematography. The darkness could have been used to add extra thrill, but who cares. Funny background score further dilutes the intensity. Smeep deserves applause for not adding up chakvein Punjabi gaaney (Loud Songs) in between the narrative. The editing could have been crispier. Two stars for this courageous attempt and for delivering a much needed message. Better luck next time.