A journey of Punjab 2016 presents the real story of Punjab in a much clichéd manner. After Udta Punjab, Bathinda Express and Ardaas Punjab 2016

is another film based on the drug problem of Punjab. Conceived by university theater students and researcher scholars, Punjab 2016 is expected to be a more subtle and in-depth film on the drug menace in Punjab, but ends up disappointing on the story front by recreating the old melodramatic narrative of politician-police nexus of drugs affecting youngsters and their families. A film with good production value and a strong important subject has gone haywire due to lack of professional approach.

Two college going alcoholic pranksters Deep (Deep Jagdeep) and Mintu (Mintu Kapa) make fools of their hostel mates to churn out cash to fill their quota of booze. They work for a drug paddler Nishan (Surjit Singh) who is the right hand of politician cum smuggler Rai (Rana Ranbir). On the pretext of Nishan both gets into the nexus of drug peddling in lieu of free supply of new synthetic drug called chitta (smack). Deep’s life takes a sharp twist when Mintu dies due to drug overdose and he is implicated in a false case of Mintu’s murder. How Deep gets out of prison and how anti-drug crusaders unmask the dirty nexus between Rai, Nishan and Inspector Bhagel Singh (Gurchet Chitarkar) becomes the major plot of Punjab 2016. This whole narrative reminds me films like Aamir Starrer Ghulam and Mika Starrer Mitti. 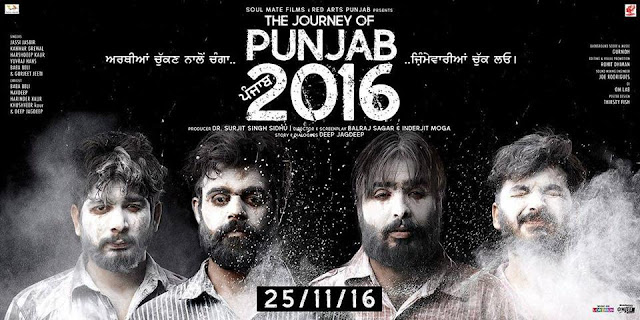 First half runs out by beating around the bushes with silly comedy and only comes to the core issue at the point of the interval. Second half is over-laden by communism and dharna-pardarshan (demonstration) which fails to create the tension much needed to reach at the final confrontation. Right before the climax film seizes its major line of rebuttal and turns towards a most clichéd mode of sting operation. The film wraps up with the voice over narration without providing any edible resolution to the major crises. And finally, this much predictable film ends with (a bit subtle) preachy message to youth to choose their paths with wisdom. This comes out to be the most powerful scene of the film. There is an anti-climax too, which perhaps tries to re-establish the reality and leaves the audience to go out with their own interpretations. The writer-actor Deep Jagdeep tried his best to translate his street play into a full-fledged feature film which lacks substance. Directors/screenplay writers Balraj Sagar and Inderjit Moga could not maintain the consistency of the narrative and fails to tailor a gripping and smooth screenplay. The film seems scattered and jerky in places; Editor Rohit Dhiman tried his best to place the pieces into a chronological order. The only dialogue I could take home is ‘ki nashe da asar, maa de dudh to vi zayada hundai bhala?’ (Are drugs more powerful than mother’s milk/affection?).  All the action sequences in the film look fake and the scene where an activist girl suddenly turns into a pro-street fighter seems over the top and unrealistic. Young boys falling prey to the drugs for academic notes seem a foolish excuse.
Actor Deep Jagdeep needs to know that there is a huge difference between performing on screen and street play. Makeup and hair styling can only give you a particular look, but you need expressions to emote. Mintu Kapa is charming and promising. Neeraj delivers with ease, especially at climax scene, he looks confident, strong and show-stealer. Gurjeet Bhangu portrays the apathy of an indecisive youngster aptly. Rana Ranbir is at his best as Rai. The biggest discovery of the film is Dr. Surjit Singh Sidhu, who plays Nishan Singh. A college principal, Sidhu portrays the character of a crooked drug peddler and emotional father with perfection. Malkeet Rauni, Anita Meet and Gurpreet Kaur Bhangu are also apt in their short roles. All the other supporting cast is just passable. Most of the theater artists deliver their dialogues like they were reading out of books. Few of them even lacked their command over Punjabi accent.
Music of the film is a major plus point. All the songs come at the appropriate point of time and add value to the screenplay. All the lyricists have done a commendable job and Gurmoh’s music takes the words to the next level. All the singers have done justice to the words and create the right atmosphere with their voice. Background score has a room for improvement. After watching the trailer, I have not expected much production value of the film, but DOP Amit Bishnoi and DI Colorist Om Creations don’t let down.
Film has an enough buzz in intellectual sectors of Punjab which could have been converted into big turnout, but due to lack of promotion and directionless promotional strategy adopted by few team members of the film is leading to big goof ups at box office. A Journey of Punjab 2016 made by theater students deserved to be watched once for their honest efforts and must be bestowed by two stars.
PS: It is a mere coincident that the review writer and the film writer are namesake, but in reality they both are two different individuals.