Yudhveer Singh (Harbhajan Maan) is a son of honest political activist who lived and died for his politics based on principals. Crestfallen with the fate of his father, resilient Yudhveer adopts a crooked way to reach at the top position of Chief Minister with the support of his two childhood friends Inder (Rahul Singh) and Dimpy (Gurpreet Ghuggi).

Just before the state elections and after the suspicious death of veteran leader of the party his spoilt son Damanjeet Singh (Dev Singh Gill) frisks his muscles to inherit his father’s throne, but during the party meeting, executive members vote against the dynasty politics and in favor of Yudhveer. Due to huge support within party and popularity in public Yudhveer is destined to be the next CM. With burnt ego and support of dynasty loyalist party president Daman plans to eliminate Yudhveer just on the last day of the election campaign. Fortunately, he fails to kill Yudhveer, but incidentally shocked Yudhveer loses his memory and get mentally stuck in the period when seven years ago his father commits suicide in front of his eyes. How his friends cope with this new situation and will Daman be able to stall Yudhveer and become the CM, is the basic riddle to be solved in the film? 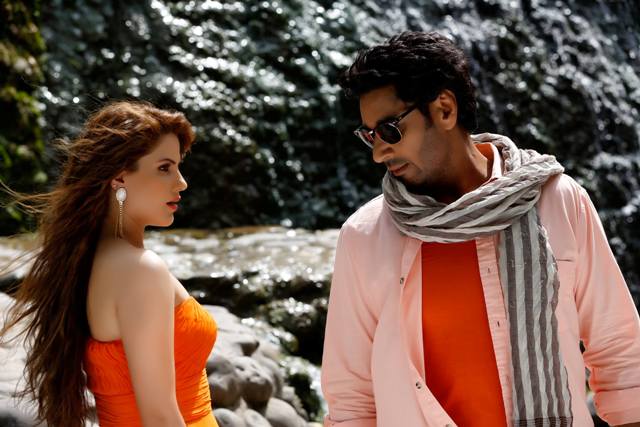 Beginning with repulsive romantic comedy and few idealistic speeches and political rivalry drama, Saadey CM Saab (SCMS) gets condensed within the premises of Yudhveer’s ancestral house in a small village. Promoted as Political Thriller, SCMS does not even touch the basic scenario of Politics or political designs of politicians to grab the power. It merely reduces to a brawl between two aspirant young politicians struggling within a party to reach at top seat. The narrative is so abrupt and absurd that before we get to hold on one tip of the story it slips to another direction. The world politics revolve around left, right or central ideologies, but in SCMS politics is remote controlled by three prankster friends at one side and at another side is a cynical political successor mentored by dynasty loyalist. Thus, SCMS turns out to be directionless film.
Sumeet Singh’s writing lacks research and depth while the screenplay sinks at many junctures. Even the characterization lacks substance. The way film unfolds on screen, it seems that director Vipin Prashar had no authoritative command upon the film. I will suggest the debutante duo to watch Parkash Jha’s films to understand the basics of a political film. A scene where, after memories lose, Yudhveer unknowingly goes to help villagers regarding the atrocities of government officials is only a saving grace. And the dialogue ‘Dudh Beer Di Bottle Wich E Leya Do, Thodi Feeling Aa Jandi Aa’ is the only funny line which gives an organic giggle. Even after having three dialogue writers Rajiv Thakur, Balraj Syal and Surmeet Maavi on board, the film fails to tickle funny bones, inveigle romance and entice any thrill.
Heartthrob, Harbhajan Maan looks charming on the screen until he poses silently, but as soon as he opens his mouth he disappoints. Throughout the film he transforms into various shades theoretically, but he remains same wooden sack in every shade. After Ardaas, Gurpreet Guggi, does not fulfill the expectations and completely disappoints. He tries his hardest to churn out a few laughs, but overall timing doesn’t fall at the right place. Bollywood actor Rahul Singh has been there just to fill the space of a friend. Lingaa fame South villain of Punjabi origin Dev Singh Gill has a strong screen presence, but due to sloppy characterization he seems out of the league. His Punjabi diction leaves a bitter aftertaste. Model turned debutante actress Kashish Singh is another casting glitch whose character is underdeveloped. She lacks spark and there is no attraction in her screen presence apart from her off shoulder dresses in the song Mere Vich Teri. In various scenes her unfitting dresses looked awkward. She is like an expressionless mannequin in the film.
Apart from the glitches of writing, acting and direction film will be remembered for it’s over the top brand integration. A Tea brand integration somehow fits in the narrative at its first occurrence and we didn’t notice at all but it’s another occurrence at the pre-climax juncture is completely forced. Beauty soap brand integration is not only out of place, but looks completely funny.  I, literally, jumped out of my seat, feeling disgusted when I saw hero and heroine dancing and romancing on the backdrop of the picturesque Rock Garden and a bar of beauty soap in the focus on the foreground. I am still wondering, which girl carries along a bar of beauty soap on her date and shows it off in romantic monumental place. During the promotions 25 minutes of VFX were promoted as the USP of the film, but I could not have a glimpse of eye catching special effects apart from pink jasmine petals in ‘Mere Vich Teri’ song which were definitely meant for the promotion of beauty soap. It seems like a musical TVC forcibly integrated in the film. Background score was completely unrelated. Especially, during the fight scene in the second half, a loop of Dhol beat keeps on playing starting and ending randomly out of place. While watching this brutal fight, completely confused, I indecisively kept thinking whether I should clench my jaws or start doing Bhangra on Dhol beat.
Dear, film makers in the name of meaningful cinema we do not need this kind of messed up films. Please try to understand and hone the art of storytelling before hiring the league of pricey stars.
In respect of our veterans who invented the ratings system for film reviews, I am bestowing  1 star to SCMS, else I would prefer to present an Aalpenliebe only.