Skip to content
Deep Jagdeep Singh
Rating 1/5
First thing first Sardaarji 2 has no connection with Sardaarji’s first instalment. So there is no ghost hunter, no funny ghosts in laboratory bottles, no sexy witch and no ghost hunting at all.

This time, Jagjeet Singh aka Jaggi Khooh Wala (Diljit Dosanjh) is a successful organic cultivator. Winner of awards and accolades for successful, innovative farming, amusing Jaggi is also known for his irrepressible anger and hardcore tough attitude in handling odd situations. Incidentally, he falls into the trap of the evil designs of his rivals. He has to pay 15 million rupees to get out of this trap and save the peasantry of his village. Jaggi goes to a foreign land to save his homeland, the village.

This time writer Dheeraj Rattan and Director Rohit Jugraj go more loosely than earlier. The best part about Sardaarji 2 is the two shadows of Jaggi, one is anger and another is calmness, both keep taunting him at various occasions affecting his decisions. This is the best metaphorical personification of two human emotions seen for the first time in a Punjabi film. The film has a strong message in favor of organic farming. Though superficially, but definitely it captures the ground zero reality of contemporary Punjab, where the major land under cultivation lacks irrigation resources due to increasing ground water crisis resulting into violent clashes between various groups of farmers. Further, it urges farmers not to succumb to adversities, but fight them out with true Punjabi spirit instead of going to escape route of suicides. This is the first film where Jatt is actually a farmer and a cultivator too. 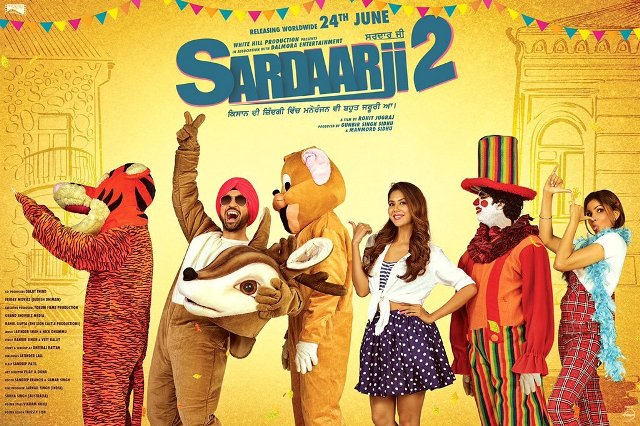 From the very beginning Sardaarji 2’s narrative goes loose and unconvincing. The narrative keeps jumping from one point to another without any connected ends, leaving the audience guessing, which track director will adopt. It only gets on the track when Jaggi gets into an ice cream truck to reach at an unknown destination suddenly. From there Sardaarji 2 takes a road drama route just before the interval. Sardaarji, his good and evil shadows and co-passengers Soni (Monica Gill) and Diljot (Sonam Bajwa) try hard to churn out few good laughs but fail miserably. The comic timing is just okay, but Jatinder Lall and Surmeet Mawi’s dialogues fail despondently. Repetitive mentions of the oversized radishes and pumpkins only loose sheen. Jaggi calling Soni ‘bandri’ and ‘soondi’ at every drop of a hat falls flat. Bhalla’s track seems forced and absurd throughout the film.
Dheeraj Rattan has tried to pen down a more grounded story based on characters near to reality, but he completely ignores the logic and gives a fragmented narrative. While Rohit has exploited the star power of Diljit Dosanjh three times more, but goes too over board having cinematic liberty, thus making a cinematic road journey so bumpy. In the second half film sinks even more. At the end it becomes preachy and culminates with a thud. Another best part is that Rohit successfully keeps the suspense till end.
Now performances, Diljit Dosanjh as Jaggi, Diljit Dosanjh as Athra and Diljit Dosanjh as Suthra in all the three shades, Diljit looks alike Diljit. As Suthra mimicking religious singer Jaghadhari Wale; Diljit shows his mimicry talent which is genuinely a surprise for his fans. He delivers the tone successfully, but his expressions remain constantly similar in all the three different shades. Jaswinder Bhalla disappoints, once again; his Lahore-Pishaur jokes start irritating after a point of time. Dev Singh Gill has to shed his south cinema style of (over) acting. His action and dialogue were out of sync at various places. Yashpal Sharma and Jatinder Kaur are completely wasted. As a female lead Monica Gill got enough screen space. She, throughout the film, shows off his stylish wardrobe with her expressionless face. In a smaller portion Sonam Bajwa looks stunning, but she still needs to work a lot on her acting skills.
Though a few songs of the film are ruling the charts, but in the film they are jarring obstructions; only adding length to already lengthy screenplay. Sandeep Patil beautifully captured the stunning countryside of Punjab and Australia equally. Many of his frames are breath taking. The background score is okay. Crispier editing could have shortened the run time at least by thirty minutes. More precisely, Sardaarji 2 actually went downward in comparison to the first part. One star for this grounded attempt.