After carving a niche in the Punjabi film industry with her beauty and few hugely successful films as an actor, Neeru Bajwa dons the hats of director with her home production Sargi.

She produced and directed Sargi to launch her younger sister Rubina Bajwa. You will have a gut feeling that she is extremely obsessed about her sister as soon as the opening credits start rolling. Real life commerades and young singing sensations Jassi Gill and Babbal Rai are sharing screen space for the third time. Sargi is a formula romantic comedy, which boasts to have some really good moments, but lacks the perfect execution.

Story
Babbu (Jassi Gill) is a romantic yet shy village lad deeply in love with Sargi (Rubina Bajwa) since he was learning to wipe his running nose. He learns to write love letters, keeping spiky hairstyles and donning brands, but he could not learn to express his feelings. Suddenly, without some comprehensible reasons Sargi decide to solemnize a contract marriage with Amrik (Karamjit Anmol) to go abroad. Desi Devdas Babbu loses all hopes to see her again. Sargi, starts working at a Punjabi restaurant run by Mr. Singh (BN Sharma) and his family. Cupid hits Mr. Singh’s playboy son Kaim aka Karamjeet Singh (Babbal Rai) and he lefts no stone unturned to woo Sargi. Dejected Amrik tries to impress his contract wife while she starts responding to Kaim’s advances. Meanwhile, Babbu, reaches there in search of Sargi and the competition reaches at a peak. Who will be lucky enough to get Sargi forms the rest of the story. 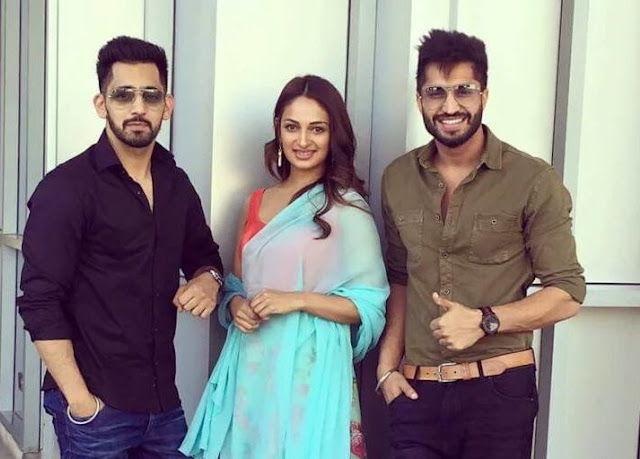 Thumbs Up
Written by Jagdeep Sidhu, Sargi on paper seems to be a complex story. The characters are realistic and setup is perfectly romantic as well as comic, stuffed with authentic desi flavor. Lalit Sahoo captures mesmerizing frames of Punjab and Kenya. The climax is Sargi’s strongest part. Though a little stretched it gives an expected cinematic as well a psychological relief to the audience.  Farewell sequence and group photo scene are memorable. In her first directorial venture Neeru tries best to stick to her genre. The gentleman playing Jassi Gill’s father and guy playing Pakka are character artists to watch for.
Thumbs Down
The basic problem with Sargi lies in its execution. Other major flaws are casting and screenplay. Apart from multi-starrer Mr. and Mrs. 420, Jassi and Babbal have never been successful to pull crowds. They are singing heartthrobs, but as an actor they have yet to prove their mettle. Their immature acting combined with immature execution turns out to be a half baked film. First two acts are slow, boring and tacky. The way writer and director chose to create comedy out of ridiculing dark skinned boy and girl’s affair, leaves a bad after taste. Most of such scenes may leave uncomfortable to those who are already struggling with these stereotypes in their real life. Apart from few funny and romantics scenes in fragments amuse you, but it can’t hold you for long. Thus, for audience this romantic comedy turns into a see-saw instead of a roller coaster ride. An almost replica of Neeru, Rubina too needs to learn the right accent of Punjabi. She has a charming screen presence and a tag of her successful sister, but she has to work hard on her expressions, body language and dialogue delivery skills. Even the writer doesn’t know how to spell Sargi in Punjabi letters, thus Jassi in his love letter spells it grossly wrong. Consequently, Jadeep Sidhu and Neeru Bajwa together could not cast a spell with Sargi. Another disappointment comes from the music department, music directors Jay K, B Praak and Gurmeet Singh; all three known for their mesmerizing romantic songs seem lost their sheen. The only saving grace is ‘fer ohi hoya’.
Verdict
If you are die hard fan of mindless home grown romantic comedies you can go for Sargi for a one time watch. But if your expectations are sky rocketing high as Jatt and Juliet kind of RomCom, Then sticking to your home theater would be a better option. Homemade popcorns will be healthier for your metabolism and pocket too. My Rating for Sargi is one and half star.
*Deep Jagdeep Singh is a freelance journalist, Screenwriter and a Lyricist.