Tiger : A Hero of Kitten Story

Deep Jagdeep Singh
Rating 2/5
Punjabis are born tigers; they have fought against invaders, they have a major share in the list of freedom movement martyrs, in Indian forces

they are in huge numbers, but this glorious history is fading due to drug menace. After Udta Punjab Tiger tries to put forward a micro story of a family which gets wrecked due to drug mafia network across the border, but it has no connection with Udta Punjab except the theme of drugs.

The story begins with a voice over introducing a village called Jangpura, which has 500 households and at least 490 has an FIR registered in their name. Three school kids in their school uniform crawling through barbed wires on Indo-Pak border with their school bags on their back. Then they jump into a boat and cross the river and enters into Punjab. They reach to Bhayiye Da Dhabba where their school bags are unloaded and they run back to their homes through narrow lanes of Jangpura. And the narrator introduces them as Gurjant aka Junt (Sippy Gill), Tull and Bunty along with drug supplier Bhayiya (Yashpal Sharma) and drug dealer Dilbag (Yograj Singh). His Social activist father, for whom Junt was a tiger, disowns him after learning about his misdeeds. In the due course of peddling the drugs across border one day these three kids escape from Pakistani army but lands into the net of Punjab police on the other side. Tull is shot in the leg and escapes, Bunty is left by police officer Sodhi (Gurinder Makna) and the third Junt lands into jail for lifetime. From here story jumps forward to 15 years where Junt has been turned into wild tiger with his worked out muscles and grown up hair and beard. From here story takes a new twist and Tiger Gurjunt starts a new journey of life. 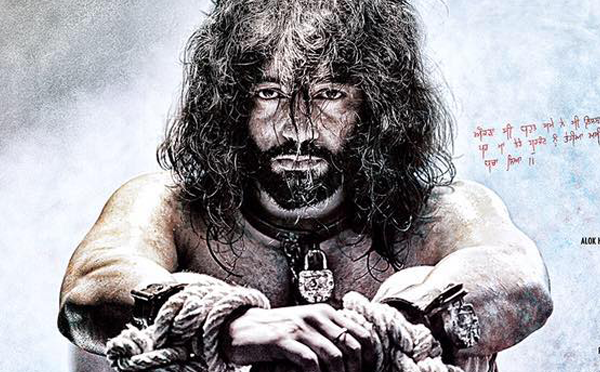 Singer turned actor and now a screenwriter Sippy Gill conceptualized the concept from real incidents happened around him in his childhood. Vishal Sethi has tried his best to turn this story into an emotional suspense thriller. Being his home production Sippy Gill assembled a promising cast and crew. He worked hard on himself to portray the character of a wounded tiger and his screen presence definitely captures the audience’s interest. Young fierce Junt reminds me of Ballu (Sanjay Dutt) from Khalnayak. Locked in heavy chains and in prisoner’s uniform, his locks keep dangling forcibly in front of his face and his fiery eyes send chills through the Jailer’s spine. Sippy’s hard work in gym perfectly translates over the screen. The film has few heart wrenching emotional scenes and high drama action scenes as well. A sequence where Junt, returned from jail, meets his mother after 15 years touches the height of emotions. Anita Meet portrayed the emotions of a mother prolifically, who has already perceived her son dead when he was just a kid; suddenly sees him. Subsequently, when his sister touches his hands to sense his presence it takes the emotions to the next level. Sippy’s silent presence compliments them. Another worth mentioning moment is an action sequence between Sodhi and Junt shot perfectly in a water channel in the middle of the farm. One more high point about Tiger is its production value which resembles at par with many productions of bigger banners. Pradeep S Khanvilkar’s cinematography captures the right mood of characters, though he has got a little chance to shoot the beauty of rural Punjab. Yet, he gives a romantic and a soothing touch by capturing picturesque hilly areas of Himachal for song Rabba. All the songs are placed appropriately in narrative and song Gym rolls at the end credits.
Now the spoilers, Director Sartaj Singh Pannu’s narrative lack the pace, spark and thrill. The story becomes predictive right after the introductory voice over. Whenever, a director uses a voice over narration technique to introduce his major characters or important aspects, I feel the director is escaping from exploring his potential of developing his narrative through actions. Many seasoned directors use voice over narration technique only as a last resort. If Pannu has properly portrayed the childhood of all the three protagonists through actions, first half might have been turned out be more interesting. Protagonist Junt has no set objective; he just keeps going with the flow, the things keep happening and he behaves accordingly. It might sound good but actually it doesn’t sow a seed of crisis in the audience’s mind. One keeps on watching the film because one has bought a ticket and landed in the multiplex. Even the unfolding of most important suspense does not excite or thrills. With the linear unfolding of narrative first half moves at tortoise pace. Interval happens unexpectedly, we realize this only when the lights are switched on. Till interval whole focus is on Sippy Grewal’s tough look and his spirit to challenge every odd without any motive. After interval film starts moving a bit, few ‘mysteries’ unfold and protagonist and antagonist come face to face for the final duel. Climax boast of featuring some larger than life action stunts, but again, it lacks the thrill and film culminates with the happy ending. Though the background score doesn’t let down the narrative, but it doesn’t add any thrilling excitement which is much needed at many sequences. A few questions remain unanswered, like, why Junt spent his whole span of imprisonment to cram law books? If Ekam (Ihana Dhillon) was an investigative Journalist, what was she doing in Jungpura, what she discovered? What was her purpose? Why she came all the way from Canada to visit Jungpura?
Now let’s talk about performances, as I have already mentioned that Sippy’s gym hard work is visible on screen. His apt look and perfect attitude, make him the promising upcoming star. Perhaps it’s a strategy or the demand of the character that he speaks too little in the film and only his blank eyes and tough attitude talks, but he still needs to work hard on his expressions and articulation to explore his full potential. Ihana Dhillon is nowhere in the film. Apart from her introductory sequence and a romantic patch during run away, she rarely appears on screen. Thus she rarely gets a chance to express or emote. Generally, her presence is charming on screen, but at few moments she looks much matured. Yashpal Sharma is again wasted. He keeps dwindling between a deadly don and comic caricature, which dilutes his excellent performance. Though, his Hinjabi jokes, tickle funny bones at few junctures. Yograj Singh again outshines in his small share of screen presence, but he is seemingly repeating himself from 25 Killey to Tiger.
Considering good production value, huge number of screens and bumper promotion, a potentially box office hit went haywire, two stars for this honest attempt.