Vaapsi is not a perfect film, but it is the most authentic film, which remains true to its basic concept ‘The Home Coming’. The film talks about

the apathy of Sikh migrants who escaped to foreign countries after burning their hands in the terrorist movement to save their families back at home. Living with false identities in foreign lands they have earned enough wealth, but the Indian State’s black list has barred them to return back home. Few of them who tried to return either lost their lives or landed into jails. Vaapsi is the story of one such man who wants to return home after twenty five years of exile.

Living an identity less life in Germany taxi driver older Ajit Singh (Gulshan Grover) gets a call from his ailing, old and weak mother laying on her death bed. She wants to see him for the last time, but she is afraid that he will be killed if he returns to his village in Punjab, from where he left twenty five years ago on a journey which has no home coming. Twinge in her voice in the opening scene sets the mood and tone of the film. This phone call transcends Ajit back to his tragic past in flashback. Around the dark period of 1984 younger Ajit (Harish Verma) is a hockey player from a small village of Punjab brimming with Joy and dreams. He represents a young boy next door of a common family comprising a farmer father (Lakhwinder Shabla), a homemaker mother (Deep Mandeep), a bubbly sister (Samiksha), a loving girlfriend (Dhriti Saharan) and two childhood friends who are his hockey team mates also. One day after winning a hockey match Ajit with his two friends is coming back to his village in a bus. Just before the bus has entered into their village a troop of Sikh terrorists stops the bus and kills Hindu passenger. One of the terrorists is Sukha (Karan Singh) cousin of Ajit who left home and missing since long. Ajit urges Sukha to leave his friends for his sake, for which he agrees. After a few days while Ajit is playing a qualifying match to get selected for national hockey team DSP GS Bawa (Ashish Duggal) arrests him on the charges for helping terrorists. Physically broken due to third degree torture, Ajit, shatters emotionally when he learns about DSP raping her sister and her suicide later. Circumstances force him to escape to Germany. Will he take his sister’s revenge? Will gun, replace the hockey stick? Will he be able to go back home? From here begins the tragic story of Ajit which never ends. 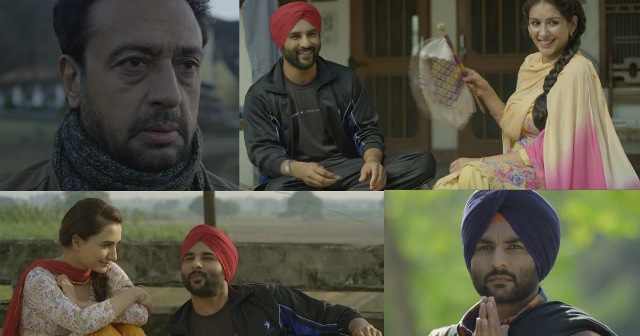 Director-Writer Rakesh Mehta goes beyond the clichéd story of a young man turning into a terrorist. Though he does not dig into the political and ideological thesis of the terrorist movement in Punjab, but he profoundly goes deep into psychological layers of a young man who is forced to play with guns in place of hockey. Meanwhile, Director, keeps on debating about the theoretical paradoxes of the terrorist movement. Through Ajit and Sukha, he tries to address the unending debate, ‘Were the youngsters on a personal revenge spree or was it a real war of identity and ideology?’ Without taking sides, he presents the approach of two breeds of terrorists and their relevance during the dark era of Punjab. In a scene where Ajit boards a bus to Delhi and Sukha returns back to his comrades, through an aerial shot Mehta shows them parting far away in two opposite directions, marks that subtle division. In the dialogue where Ajit says, ‘Killing you (DSP) won’t reform the system…’ is the essence of the story. Apart from such few subtle dialogues Mehta’s overall dialogues lacks strength and depth. The way he gets into the details of everything he succeeds in portraying true and ethnic Punjabi ambience, culture and characters of the period. Though, somehow that makes the screenplay lethargic and stretched. Though the way incidents unfold, they keep us glued to the screen, but crispier editing could have helped to make it pacy and cut down the length by at least 20 minutes. Dhirender Shukla’s cinematography enriches the scenic value of the film. Though placement could be more appropriate, but each song of the film expresses the required emotions of the characters. After a long gap film music has a lyrical value which resonates with rich lyrical legacy of Punjabi poetry. Title song penned by Amardeep Gill on the one hand provides strong roots to the narrative and on the other hand touches the core emotions of homecoming. Gurmeet Singh’s music and all the singers with their soulful voices takes the lyrics to further heights. It goes beyond the song ‘kujje wich ayunga swah ban ke’ of Punjab 1984. Song Maa also deserves a special mention.
As young Ajit, Harish Verma once again proves his mettle as an actor. From a young son to grieving brother, a dedicated hockey player to idealistic revengeful terrorist and a soulful lover, he lives every shade of his character with sheer ease and naturally. Gulshan Grover as older Ajit takes the character to another dimension with subtlety. The way he portrays his self realization and perseverance for home coming invokes a natural empathy towards him. Ashish Duggal has too little to show off, but he perfectly fits into the bill. As a compassionate sister Samiksha touches emotional chords. For the first time Dhariti has looked like an authentic Punjaban. Till now both the girls are underrated in the Industry, if given appropriate chances both can add value to Punjabi cinema. Karan Singh needs a special mention for his apt performance as a committed ideological terrorist as well as a sibling who shares right emotions with a grieved Ajit. Deep Mandeep is the real show stealer as a mother. In her every shade from jolly mother to worried mother and further as a mother longing for her son, she gets right into the skin. Her voice and expression further enhances the feeling of pain and compassion. The director goes on to personify her as wrinkling motherland waiting for her son who could have cured her pains. The supporting cast is strictly okay.
As mentioned in the beginning, Vaapsi has its flip sides too. Rajjo’s character lacks consistency, I could not understand her indifference towards Ajit after he returns broken and handicapped from police custody, but latter she wants him back when he becomes a terrorist. In a most crucial qualifying match Ajit’s yellow team plays against only the goalkeeper of the blue team. I could not find another blue team player in the whole scene. I think producer refused to pay for the whole team. In the climax Ajit repeating his tragedies looks completely awkward. Only the last line was enough for an appropriate ending. It looks foolish when a trained and crooked DSP keeps listening clichéd dialogues from a most wanted terrorist on a public stage, he could have knocked Ajit down and grabbed his gun in that span of time. The director must have kept that subtlety till the end, which prevails throughout the film. The last sentence in the ending narration ‘Still, many Sikhs are living in foreign countries who want to come back home, will we open the doors’ leave us with a thought to ponder upon.
This film might not surpass the star studded Punjab 1984 based on the similar subject at the box office, but content wise it definitely has an edge. Three stars for this qualitative film, which might push the idea of substantial cinema further in Punjabi Industry.