Zorawar is another Punjabi film super ruined by super stardom called Yo Yo Honey Singh. After Ambersariya this is another film of 2016 which went through a miscarriage before completing its gestation period. Thus, most anticipated action thriller turned out as laughable stock.

Zorawar Singh (Yo Yo Honey Singh) is a super cop of Secret Army Force (SAF) who goes on secret army missions all alone. The macho Zorawar is a stubborn soldier who doesn’t pay a heed even to his boss. Zorawar lives with his mother Sheetal (Achint Kaur) and one fine day he falls in love with Jasleen Kaur (Parul Gulati) when he comes to his unknown hometown in Punjab. Incidentally, her mother comes across the twenty five year old letters of her lost husband and real father of Zorawar, Samarjeet (Mukul Dev), who is supposed to be dead. This time Zorawar goes to Durban on a personal mission to find his lost father, where he seeks help from an African cop Tejpal (Pavan Raj Malhotra). Will he be able to find his lost father? The Bigger question is, will he be able to return home alive? This is the journey of Yo Yo Honey Singh as Zorawar. 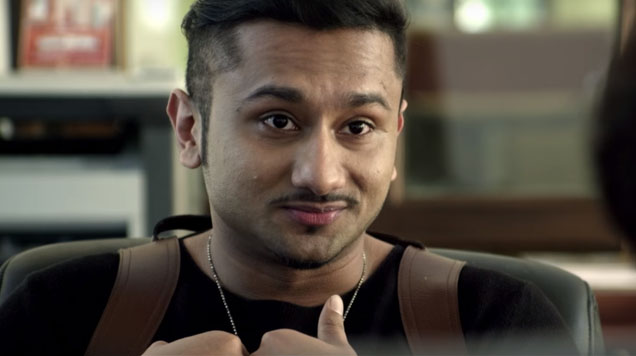 Sagar Pandya came up with a fresh concept where strings of relationships are entangled between three generations. Everyone is seeking home coming, but circumstances are dragging them away. It could have been the most emotional story dealing with father-daughter and father-son relationship if given in expert hands, but Director Vinnil Markan failed to keep the emotions at center-stage and wandered around loosely handled actions, mindless comedy and jarring romance. Nothing comes up naturally and makes the screenplay dull and boring. Unskilled execution of graphics further spoiled the action sequences. Music is already ruling the charts, but only adds length to the narrative. Background score adds the required thrill, but could not lift the sloppy script. Hemant Behl has written few rustic dialogues with the essence of Punjabism. DOP Mohana Krishna’s cinematography gives a rich look to the film. His aerial shots are breath taking.
Earlier, from Punjabi cinema to Bollywood, Producers were advised to ‘cast’ Honey Singh to make the film a hit, but now onwards people only will cast him to ruin their film. As Zorawar, Yo Yo Honey Singh completely fails to carry the character of a soldier and ailing fatherless son. His body language is of a spoilt brat and dialogue delivery is childish. In the moments of romance he utters funny rap lines as dialogues. During confrontation scenes he looks lethargic and high on ecstasy (Pun Intended). Mukul Dev once again delivers his best performance as an aggrieved father and hardcore mafia king with a pious heart. Pawan Raj Malhotra steals the show in his various shades of tough cop and as a conning man in uniform. Parul Gulati is an eye candy with a flat face. Bani J as Zoya looks hot and promising while she carries a tough look on her face throughout the film. All of them need to work hard on their Punjabi. Achint Kaur aptly performs as a mother, but I think she was miscast as a mother of a grown up son like Honey Singh. She looks like his elder sister. At few places, her Punjabi was better than Parul, Bani, Honey Singh, Mukul Dev and Pavan Raj Malhotra.
Now let’s talk about few spoilers in the storyline. Why Sheetal kept Zorawar in the dark about real his father while her second husband accepted her and her son even after knowing everything? How could a common African lady hack African police records while a super cop fails to trace a single clue? Moreover, how could she understand the Punjabi dialogues of his husband (Didar Gill) but not of Zorawar Singh? In a scene where Mukul Dev is healing in a resort after getting injured by a gunshot, he addresses Honey Singh with his real name Zorawar, while for him, not knowing his real name and background, he is simply his gang member Zoro. Dear Mr. Director, please pay some heed to continuity at least. For heaven’s sake, please tell us why Samarjeet Singh changed his name to Sangram Singh if he was still waiting for Sheetal to come back? What was the need of that telephonic conversation between Sheetal and Sangram if it does not contribute in complicating or solving the mystery? The biggest question how a criminal in Punjab can be a cop in Africa? How could he spend all his duty hours for so many years just planning for his personal revenge? If Zoya was also his undercover what was the need to keep her in dark about Zorawar being another undercover? There are so many unanswered questions which audience will never ask, because the audience is avoiding this movie from the very first day. I too was a loner in the middle of a multiplex along with few lovebirds in the corners. It is definitely not a comeback of Yo Yo Honey Singh.
Just one and a half star for an attempt on a genre which is still untouched in Punjabi cinema.