Romcom is a genre that is being interpreted in a hundred different ways in Punjab films. Ideally, for those of you who need more dope, this actually means romantic comedy. by this virtue, a film should have romance and comedy both. Apply this to Punjabi film Fer Mamla Gadbad Gadbad (FMGG) and one out of the two finds favour-com overshadows rom! Directed by well-known videographers Rimpy-Prince, starring Roshan Prince, Japji Khera, Bhanushree Mehra, Rana Ranbir, BN Sharma and Rana Jung Bahadur, FMGG is an attempt to make you laugh, which is managed to some extent, and fall in love… with whom we could not figure till the end! 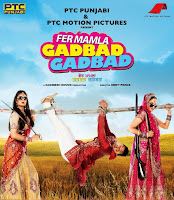 The film definitely comes in a crisp form but with loose ends, which you can see with your naked eye! Rimpy-Prince tried their bit with the film; if only they could be more gripping and enjoyable like their music videos. ‘Comedy’ is the thing which every Punjabi film director banks on; in FMGG you will either laugh or look at the people around in the theatre and wonder what made them laugh! If only the ends of every scene were joined in a chain, the movie could have been a thorough entertainer.

The movie, however, belongs to actor-singer Roshan Prince. He will definitely make your hearts spin with his charm and comic timing. The actor plays Jassi, the guy stuck between two girls. Roshan Prince is every bit a hero material, just as Rana Ranbir (Rambo) says in a dialogue- ‘Eh tan Gippy Diljit di chutti karwa davega! Equally commendable on screen is Japji Khera. She not only looks pretty, but also brings the same element in her acting as well. In fact, she might just surprise you with her punches. it is the other lead actress Bhanushree who has been wasted. Other than song and dance, we wish she had something to say.

FMGG goes at its own pace, but you have to bear with it or just speed out of the theatre. if you plan to do that, you might just be pulled back by Rana Ranbir or Rana Jung Bahadur or BN Sharma’s saving grace comedy. And you bet Rimpy-Prince have done this job well. What wasn’t expected was lak gadvi warga, where did this come from?

-by Jasmine Singh
The Tribune