Skip to content
Ludhiana | JP Network
“You have seen me as a good guy in my previous films, but for the first time you will see me as a bad boy in Saadey CM Saab. Not only bad but you will see my four different shades in the film”, said Harbhajan Maan in Ludhiana at a press conference held at Wave Cinema.

Apart from Harbhajan Mann and Sumeet Singh, MD of Unisys Infosolutions –Saga Music, the company that has produced the movie, were also present. Sumeet Singh while answering Just Panjabi reporter’s question said that Punjab film industry is still so unpredictable and we can not calculate the exact market feasibility. That’s why even many low budget films struggle to recover its production cost, while others unexpectedly collect huge box office numbers. Singh said, “Though Saadey CM Saab budget wise is a much bigger film but we are not expecting much margin but we are happy that we are opening into new European territories which will expand Punjabi film market and scope for higher revenue will grown with this. 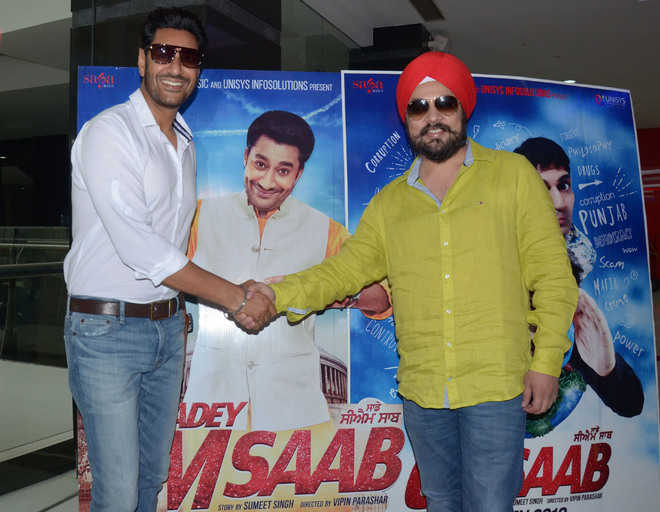 Sumeet who himself has written the story of Saadey CM Saab says, “I can only be thankful to the Almighty for this Idea. I don’t know how this happened but I am happy that now it has been converted into a high production quality film, which has 25 minutes of VFX, for the first time for any Punjabi film. We have a unique ensemble of cast and crew from Bollwyood and South cinema, which will be bringing a fresh air in Punjabi cinema.”
While answering questions Harbhajan Maan once again confirmed that he is not at all interested in Politics. Further he clarified that though film is releasing during the high time of state elections round the corner but Saadey CM Saab does neither endorse any politically party nor stand against any one. Saadey CM Saab is the story of three friends who refrain from politics but due to a vicious circle of fate they fall into politics. With polls in Punjab around the corner and looking at the sorry state of affairs that Punjab politics is in, the film will certainly give a resounding and positive message. Saadey CM Saab” is ready for a worldwide release on May 27.
‘Saadey CM Saab’ demanded access to not just a Punjabi but a wider Hindi film audience. I am very happy that the movie is being dubbed in Hindi,” Mann added.