~Deep Jagdeep Singh~
Rating Hajmola Family Pack/Mega Grocery Store
The Legend (15th Century): Dulla Bhatti was a real Robinhood of Punjab region of medieval India who led the revolt against Mughal emperor Akbar. His father Farid and grandfather Sandal were executed for opposing the land revenue collection scheme imposed by Akbar. Dulla was born four months after the death of his father and coincidentally Akbar’s son Sheikhu (later known as Jahangir) was born on the same day. For a bright future, Sheikhu was fed by Dulla’s Rajput mother. Both grew up and split from each other in due course. Latter, Bhatti becomes a bandit who is known for taking from rich and giving it to poor. He patronized marriages of poor girls, and protected them as daughters. In the commemoration of one such marriage ceremony, a folk song was composed by folk artists in Dulla’s praise ‘Sundar Mundriye Ho’ and that day is still celebrated as Lohri festival in Punjab.

Film Dulla Bhatti (2016): Writer/Director Minar Malhotra took the basic premise from the legend and set it in the modern Punjabi village. A kid Dara (Anmol Verma) and Zorawar is growing up in custody of their mother (Amar Noorie) and uncle (BN Sharma) while Noor is a childhood friend from a nearby village. One day Zorawar has to leave and little Dara feels broken; even Noor could not keep the contact, but his inspiring Uncle pushes him for playing Kabbaddi. Dara turns out to be a super Kabbadi Player as he grows up in young strong lad. Meanwhile, when young Noor (Aman Hundal) visits the village Dara falls for her. And when she learns that he is none other than her childhood friend Dara, she reciprocates him equally. At that juncture Dara’s rival Lakha tries to molest Noor which turns into a scuffle. Consequently, a secret unfolds, which completely shatters Dara and his course of life takes an unfathomable twist. How will modern Dulla Bhatti as Dara, culminate the six hundred years old tale in contemporary times, film tries to look at. 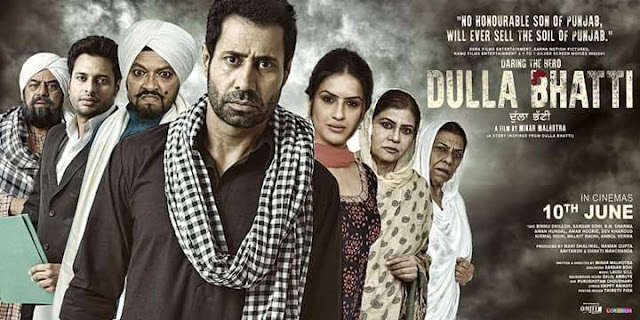 Sadly, modern saga of Punjab’s one and only Robinhood Dulla Bhatti; with a powerful idea went completely wrong. As writer Minar Malhotra, came up with a good league of characters based on a folk tale and weaved an interesting story around them, but as a director he completely failed to execute the basic premise of the story. Each and every character goes hay wire, story shatters like the debris of low intensity bomb, creating a loud noise without even touching the ‘victims’. Yes, I feel the audiences of such films are the victims who pay out of their pockets to get bombed. Every major character in the film has a secret, but there are no apparent circumstances to vomit out. They are just popping out in turns.
After every fifteen minutes, there is one killing. Why, only Badshah Akbar knows, because Mr. Malhotra has even not cared to have a thought. Even the new characters keep coming out of nowhere when a need arises and suddenly they goes into deep slumber when others are eating up the screen space illogically. And the climax reminds me of the those Bollywood classics of 70s, in which completely torn off a hero, almost dead, sees a traumatic flashback in his subconscious mind and wakes up out of his corpse to forcefully kill his deadly cheered up enemy with one final blow. Dialogues by veteran writer Sardar Sohi disappoints unexpectedly. The film completely fails to establish what good our modern Robinhood has done for society? How his rebel against Jagir Singh (Sardar Sohi) is in favor of a larger social justice? Dear Minar, I appreciate you for the disclaimer at the beginning, declaring that the film is inspired from historic events, set in the contemporary locale, but my lordship you forget to mention that yours ‘contemporary locale’ is set in 1975.
Typecast as comedian Binnu Dhillon signed this film in a notion to add a legendary solo lead role in his portfolio, but the way it came out, it only tarnished his image as an actor instead of doing any favor. Performances by seasoned actors like Binnu Dhillon, Amar Noorie, BN Sharma and Sardar Sohi went too over the top that they crossed the limits of over-acting. Each move them is so over dramatized that they surpassed the triple frame replicating slap sequences of Ekta Kapoor’s serials. There is no meat in Dev Kharoud’s character Zorawar and the skeleton he got; he didn’t even care to deliver through it. Debutante Aman Hundal is being just there to look good in Punjabi suits. All the three kids definitely gave their best shot. The background score is completely out of sync. Emmy Virk’s title song tries to elevate the spirit and another sad, romantic song by Happy Raikoti is soothing but was not required at all. Remaining songs were sheer waste. With the limited locations and dark ambience cinematographer has little scope to explore, even the lighting is not properly done. The poor editor tried hard to stitch the material available at his disposal.
If you are still expecting me to share my rating for Dulla Bhatti, I would like to offer you a family pack of Hajmola.