Skip to content
A major disclosure was made that would definitely create a stir in the Punjabi film industry. PTC would now venture into the making of films. A major hint had already been dropped by the channel in the promo of Voice of Punjab – Season 4. They had announced that the winner of this season would get an opportunity to sing a song in the film produced by PTC Motion Pictures Production. 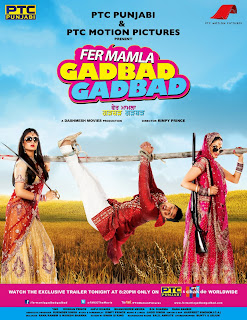 An official declaration was made today that PTC would be making a beginning in this field as a Presenter of the Punjabi film ‘Fer Mamla Gadbad Gadbad’, a Roshan Prince film directed by Rimpy-Prince. The film is all set to make new records in the promotion strategies in the Punjabi film industry all over the world. It is for the first time that about a dozen teasers have been released for the film and lot of hype was created as a result. Today, that is, on 30th May at 8:20 pm, the first look of the film for which the teasers were prepared will be revealed on PTC. The announcement to be made through full-page advertisements in all major newspapers of Punjab for the same is also a first time. According to reliable sources PTC has prepared a plan for the promotion of the film through a host of new ways, which will prove to be trend setters for the otherwise common ways (like organizing events in colleges). Many big names, which are to be a part of the promotional events are all set to bring about a record breaking promotion. They would be covering all major cities of Punjab and the surrounding areas with a view to target the Punjabi audience in the whole of North India. The music of the film would play a very vital role in promoting the film. The singers, who have churned out melodious numbers, include Master Saleem, Sonu Kakkar, Kamal Khan and Roshan Prince. The music is promising with a lot of variety. PTC Motion Pictures will be producing and releasing Punjabi Feature Films, for the avid Punjabi viewer. The banner plans to produce and release 3 to 4 movies every year, while exploring and working on different genres of movies that will be rooted in wholesome family entertainment, apart from roping in established film stars and directors, there are plans to give fresh talent a break too. Reliable sources have also divulged the information that many of the biggest stars of the Punjabi film industry have already been signed by PTC Motion Pictures Production and many big film projects are in the pipeline.