Skip to content
Facing a ban on their movie Team Sadda Haq is ready to chop out the controversial scences from the movie. Sources closed to producer and actor Kuljinder Sidhu told us that during his visit to Shri Akal Takhat Sahib, Amritsar, Sidhu was very upset. He is ready to go to any extent to get removed the ban from his most ambitious film. Even he is open to chop out the objectionable scences from the movie. According to the source Sidhu is ready to cooperate with the government, but government is still tough on its decision of ban. 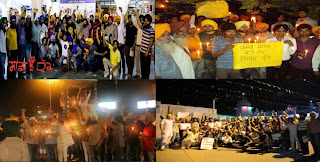 Controversy started with Sadda Haq’s song Baagi sung by Jazzy B. Then Shev Sena, Bajrang Dal and other parties protested against the movie. Punjab government banned the film in Punjab, while exibhiters from other states including Delhi, MP, Harayana, Rajasthan and Himachap Pardesh decided not to release the film.
On the other hand various reports coming from overseas are in the favour of the film Sadda Haq. If these reports are to be believed Sadda Haq has collected almost Rupees 1.25 crores in UK and USA. This figure is based on the reports received from various screens while comprehensive report may shoot up the figure high. Meanwhile candle light marches were performed in various parts of Punjab with the demand to uplift the ban from the film Sadda Haq. Punjabi Celebrities Harbhajan Mann, Jazzy B, Amrinder Gill and lyricist Amardeep Singh Gill has already declared their support to the film.