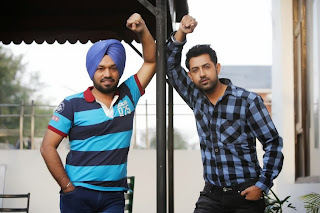 The film is the story of Gurpreet Ghuggi who plays the character of Sandeep Cheema, juggling between two wives. His life ends up in a complete chaos with the entry of Gippy Grewal who plays Jeeta and falls in love with Preet played by Ragini Khanna. In this comedy of errors of epic proportions, both sides know the deepest and the most intimate secrets of the other, which each wants to protect at any cost and holds it over the others head. The film is a budding laugh riot and as one hilarious situation unfolds after another, the film only gets more interesting and engaging.


‘Bhaji in Problem’ stars some of Punjab’s most reputed stars Gippy Grewal and Gurpreet Ghuggi who are joined by Sasural Ghenda Phool’s Suhana Raghini Khanna, and veteran actor Om Puri as central characters. The film is directed by Smeep Kang who has delivered successful hits such as Carry on Jatta and Lucky Di Unlucky Story. The film also sees cricketer Harbajan Singh make a friendly appearance along with producer Akshay Kumar, who a Punjabi himself, having an extended appearance.
You can join us at Facebook and Twitter for latest updates.